Postvention Assisting those Bereaved By Suicide (PABBS) ONE DAY Training

The ‘Postvention Assisting those Bereaved By Suicide’ (PABBS) Training is now CPD Accredited and aims to increase the knowledge, skills and confidence of health and care professionals so that they can appropriately respond to and care for those bereaved or affected after a suicide. Providing this type of ‘postvention’ support after suicide is recognised internationally as a key aspect of suicide prevention.

PABBS training is the only evidence-based suicide bereavement postvention training internationally. It is based on direct research evidence, via a three-year study funded by the NHS National Institute for Health Research (NIHR). This training has been evaluated at the University of Manchester and found to be both effective and highly rated/acceptable to a wide variety of health and care professionals. Professionals from a wide variety of professional backgrounds have attended PABBS training (e.g. GPs, mental health professionals, funeral directors, social workers, faith leaders, teachers, prison staff, housing association staff, military personnel).

This one-day highly interactive workshop is delivered by two facilitators with extensive knowledge and practical experience of working in the field of suicide prevention and postvention. (While the sessions are interactive, the training does not include any role-play).

Training days run throughout the year and can be booked directly. Suicide Bereavement UK also delivers PABBS training in-house for organisations that may wish to train discrete groups of professionals.

What is included in PABBS training?

Training materials to support learning include:

All activities aim to increase understanding, motivation, and stimulate discussion.

What is unique about PABBS training?

Key documents that refer to PABBS training and research

National Institute for Health and Care Excellence (NICE, 2018) Suicide Prevention Guidelines in Community and Custodial Settings refers to Paper 1 from the PABBS Study This paper, which reports the experience of GPs about dealing with parents bereaved by suicide was cited as evidence in the NICE guideline, which aims to reduce suicide in the community and custodial settings. Dr Sharon McDonnell also provides an expert testimony in this document, including recommendations (pg 69)

PHE, 2016 A Guide for Providing a Suicide Bereavement Service (pg 14) 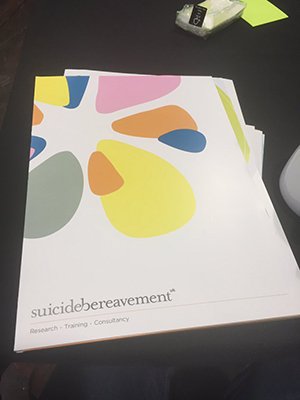 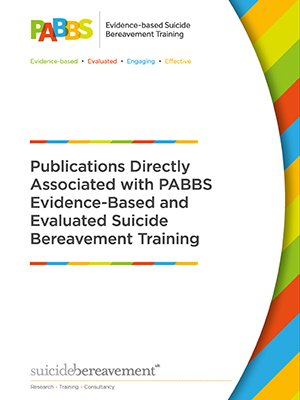