I mentioned in a previous post that I met Eve Barratt, who is the Director for Lifeline, South East Australia.  However, the main emphasis of the previous post was on the specific role this charity plays within the community in relation to suicide prevention. Specifically, the way the organisation is committed to serving the whole community, including those who are also imprisoned.

It is important that we recognise prisoners as part of our community as the majority are detained for a relatively short time frame, before they are released back into society.  Prison establishments make every effort to rehabilitate them whilst they are detained, by teaching them new skills. Some of these skills can be as fundamental as teaching them to read and write. For others, it might involve teaching them a specific skill, such as joinery. Eve Barratt works closely with Mount Gambier prison as she supports the ‘Listener’ service within the prison, which provides peer support for prisoners who feel suicidal. Eve sought permission for me to visit their establishment and talk to prisoners about the ‘Listener’ service.  For this post I will talk about my visit around the prison.  I will write a further blog about the ‘Listener’ service implemented and supported by Eve Barratt of Lifeline.

Mount Gambier Prison is the only privately managed prison in South Australia. It is currently managed and operated by G4S Custodial Services.  The prison can accommodate 294 male sentenced and remand prisoners, and caters primarily for medium and low security prisoners. The prison can also accommodate short-term high security male and female prisoners. Approximately ten per cent of prisoners have been given a life sentence. The current age range of the prisoners in Mount Gambier prison ranged between 18-85 years. For those not familiar with the UK criminal justice system, those entering an adult prison must be aged 21 years and over.

I visited the workshop that teaches prisoners woodwork skills.  I was informed that many are taught the basic skills, with many progressing to become competent joiners.  The workshop makes beautiful furniture (e.g. cupboards, tables, bed frames etc.) which are purchased by furniture companies and sold on the high street. The workshop is run as a profitable business. In fact there is a huge demand for the furniture.

I also visited the kitchens where prisoners prepared the food for the whole establishment.  Again, these prisoners will learn skills that might enable them to gain employment upon their release.

As mentioned previously, some of the prisoners have been detained for a considerable time  and often become institutionalised.  As part of their rehabilitation they are taught how to live independently.  These prisoners are housed in what were called ‘cottages’. In reality they are small bungalows that house six prisoners.  Each prisoner has their own room and they share a communal kitchen and dining area.  They are taught basic skills that will help enable them to cope more effectively upon release, such as how to cook, how to manage a personal budget etc.   I was invited to look around the cottages and they were immaculate.  It was evident that the prisoners took pride caring for their home. Outside one of the cottages I noticed two budgerigars.  I was informed that prisoners in the cottages where able to save the money that they earned to buy a budgerigar as a pet.  Again, this is all part of the rehabilitation process, learning to take responsibility for themselves and others.

Talking of pets I was also informed that some prisons in Australia support a blind dog charity.  That is, prisoners who are deemed suitable take responsibility for the care and training of a very young puppy that would eventually be trained to be a blind dog.   Arguably, this might give a prisoner a sense of responsibility; help to increase their self-esteem and also give something back to society. It might be worth exploring this in open prisons in the UK.

The prison has recently been extended to house more prisoners.  The extension is a very modern but a closed complex.  That is, prisoners in the newer part of the prison did not have the same freedom as those living in the cottages.  The cells were placed in a square shape and all cell doors opened onto a grassed area (see accompanying picture).  As I was walking round I was informed that the cells were converted from metal freight containers.  Each container housed two prisoners.  To be honest, it was not apparent that the buildings were developed from freight containers. In fact it looked a very modern complex.  However, their cells seem cramped.

As you will all be aware, a few months ago Australia experienced a heat wave and experienced dangerous temperatures of 45 degrees.  The staff explained that this was extremely problematic for the establishment as the mental containers in which some of their prisoners were housed retained their heat.  Special measures were adopted during this time to ensure their safety.

During the afternoon I met up with several prisoners who are ‘Listeners’ in the prison.   I will talk about the meeting with the prisoners in a separate post.

A Gift Given by Mount Gambier Prison

On my departure I was given a beautiful hard carved lizard made by an Aborigine prisoner. I cannot tell you how thrilled I was to receive it.  In fact, it is so beautiful I have included a photo of it below.  I will treasure this memento as it will remind me of my visit to Mount Gambier prison. 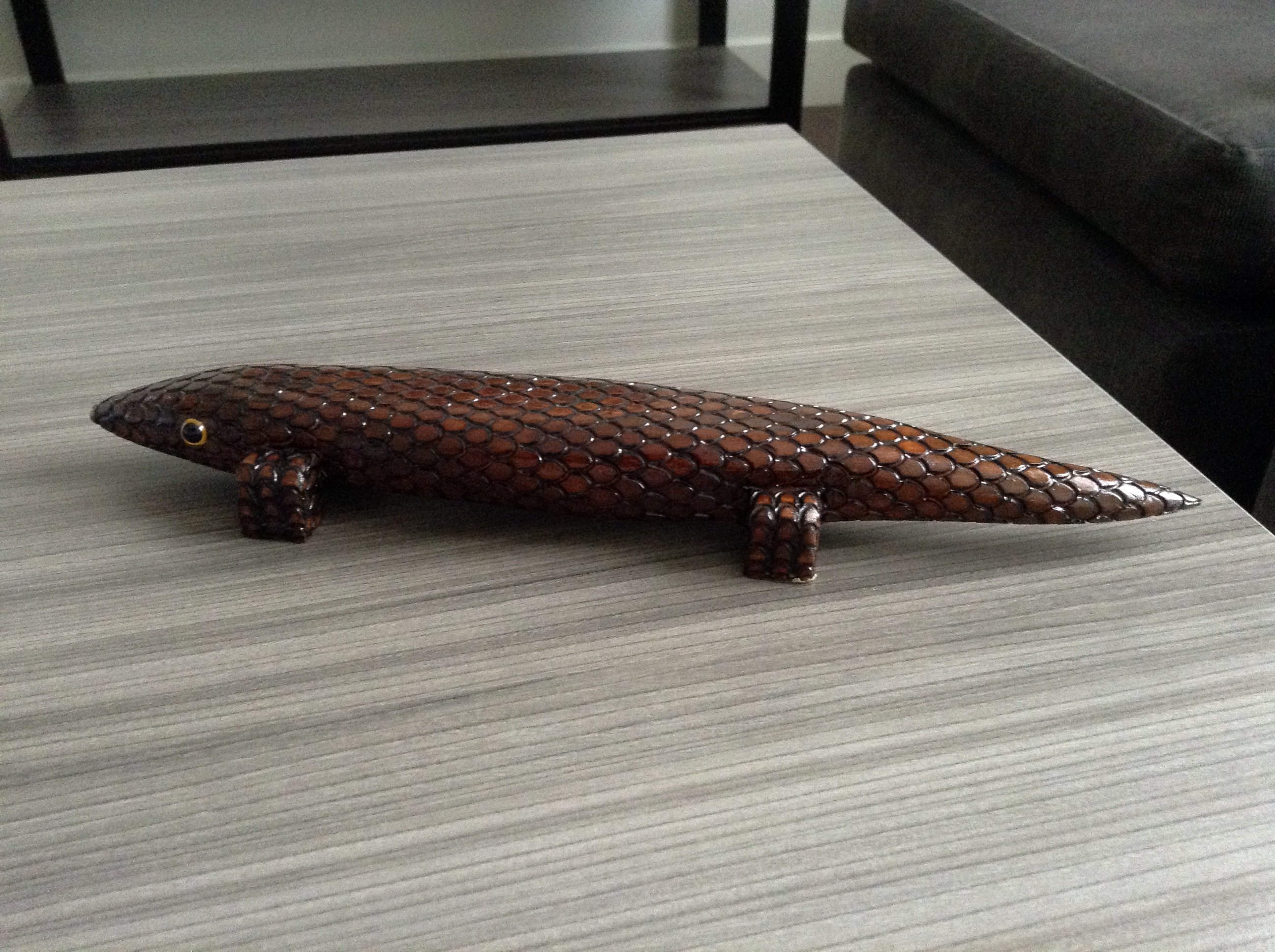 I would like to take the opportunity to thank the following people:

This site uses Akismet to reduce spam. Learn how your comment data is processed.

Enter your email address below to subscribe to our blog